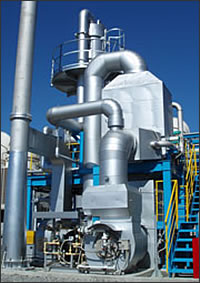 Our catalytic deodorizing equipment uses a precious metal catalyst to completely decompose foul odors, fermentation odors, ammonia odors, VOC (volatile organic solvent), which have previously been considered difficult to deodorize.
We have a catalyst dedicated to foul odors, fermentation odors, and ammonia odors and a catalyst dedicated to VOC (volatile organic solvent). Either or both of them can be selected depending on the details of the deodorization treatment needed.

Harmful carbon monoxide and carbohydrates contained in exhaust gas discharged from factories are burnt to oxidatively decompose them into harmless carbon dioxide and water vapor. However, the high temperature of 700 to 800°C is necessary when no catalyst is used. When a catalyst is used though, complete oxidative decomposition can be performed at the low temperature of 150 to 350°C.
Low-temperature combustion results in reducing NOx emissions. In addition, the combustion heat generated at the same time can be recovered and made effective use of.

Reaction temperature of various organic compounds and concentration after treatment